Home » 9/11 » Symbolism, superstition, or how adhesives let me down

Symbolism, superstition, or how adhesives let me down

This was a wall in our apartment for about a year and a half.

But, then the face-melting summer of 2016 happened.  And apparently, 3M Command Strips aren’t forever. So, over the past couple of weeks, this is what that wall came to look like:

One by one, they all came down. Strangely enough, only in the middle of the night,* never when someone was there to see it happen. We would wake up in the morning, make our way to this hallway, and there, on the ground, would be one of the frames. Never more than one at a time.

At first, my laziness was paramount. “Eh, I’ll replace it soon.” Or, “Eh, I’ll figure out another way to hang them where this won’t happen.” I never did.

But it wasn’t until the day that the piece that I’d sort of placed as central to the whole display came down, that my frustration drove me to action.

You see, all the artwork in the black frames are New York City-scapes scratched out onto this special black paper by students in a Brooklyn afterschool program (they sold the artwork as part of a fundraiser). And of all the frames that fell off of this wall, this fall was the only one that resulted in broken glass, which would have been impetus enough to do something about the situation, but that it happened to this piece seemed significant, somehow.

That one piece in the middle holds a particular space in my consciousness, as it may for many other people. 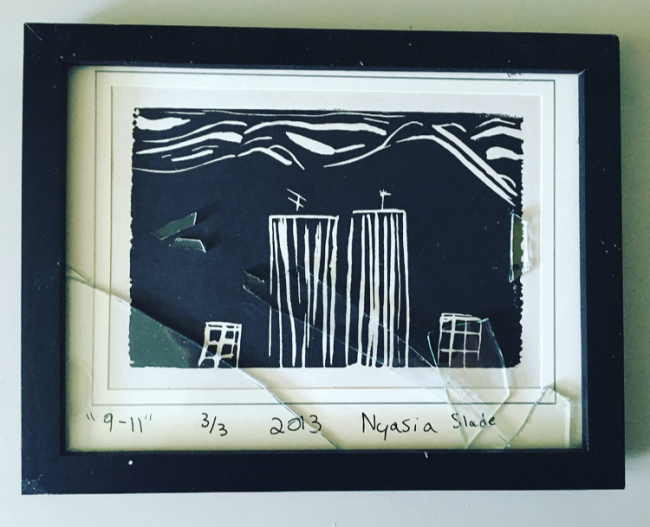 Until I can figure out a safer, more stable way to display these pieces, the hallway is but a reminder of things past, of my inability to navigate Pinterest for crafty solutions, or, at the very least, of the failure of American ingenuity to make mightier adhesives.

*We have not yet ruled out the possibility of evil elves.

← If you’re looking for me, I’m not here. Survive and rejoice! →