Home » World view » Syria, Serious Cat, and things that might be wrong with me 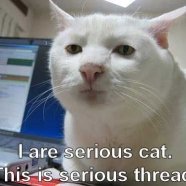 Syria, Serious Cat, and things that might be wrong with me

Posted by fascinatorium on September 23, 2014 in World view | 3 Comments

In a weird twist on Lent (of which I’m not normally observant), I decided to give up Facebook for the month of September. This wasn’t a special internet ‘challenge’, I didn’t even announce my departure. It just had to be done. Because of cats. 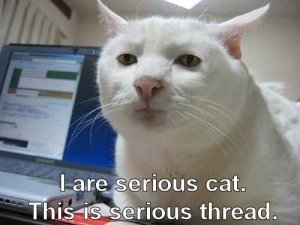 Courtesy of Forbes Magazine, “Cats On The Internet: A Psychological Explanation”

I love cats. I don’t currently own one, on account of marrying a guy who’s allergic to them (and yes, I tested him with real live cats). But I do love them. I just don’t see why they have to be all over my interwebs, especially when people have to ask me to stop what I’m doing just so they can show me something awesome. These situations, while in no way are harmful, inconvenient, or otherwise bad, are often just so awkward. Because I can’t give you what you’re looking for.

It isn’t just the cats. It’s the (now non-existent?) ice bucket challenges, the uber-staged & stylized-and-oh-so-sweet marriage proposals, scored by Bruno Mars, the images of unsuspecting dipsomaniacs in all states of undress and humiliation, little kids who sing songs made for embittered, world-weary sirens of yore. It’s all of it.

I don’t hate those things, I don’t care whether people like them or not. I just can’t live up to my end of the implied social contract, and respond appropriately. No oohing or ahhing. And very often, no laughter.

I’m often not amused by what’s funny. I’m not at all saying that I have a superior wit and keen understanding of the human experience. I’m not even too good for the comic stylings of Dane Cook. I’m just missing the laugh-out-loud gene. (And no, I will pretty much always spell out/say laugh-out-loud, rather than its derivative. I’m missing the web-speak gene, too.) Things – images, shows, comics, stuff just gets scanned by eyes and brain, and I appreciate their humor and cleverness. They just don’t seem to travel through my diaphragm or belly for some sort of emotive response. I am humorly stunted.

Very few people know it, but I really do appreciate humor. And I guess I have to say that I tend to appreciate ‘thinking’ humor a lot. Sometimes I will laugh at something sad or tragic, because laughter is one of the strongest, most visceral emotions, and sometimes is the only way to release the tension of a moment or situation.

I’m not as well-informed as I’d like to be. And I tend to stray towards the middle when it comes to most issues (not on the fence, just somewhere in the pragmatic middle, with wing nut and nut job on either side of me). I happened on a tweet that made me think, which of course made me laugh.

Americans can learn about and care about whatever they want. But I’ve seen this documentary. One of the Syrian subjects was asked something about how can the world help. He points to this cat sitting on a chair in a bombed-out alley, and says [totally paraphrasing the film here] “Maybe if we put that cat on the internet, YouTube, maybe Americans will see it, think it’s funny, then realize, ‘Hey, there are people in this video. And devastation. I wonder what that’s about?’ And then maybe help will come.” This tweet reminded me that when I saw the documentary, I thought, “Hey, how do people –  in an ostensibly war-town country where social media and news outlets are likely monitored and limited by the government – know that Americans watch cat videos on the internet….a lot?”

Paying attention to the world around me takes effort, so I tend to take advantage of any motivation to get off my (proverbial) ass to do something about anything, even if it’s just to figure out what the heck it is/is about. They say a journey of a thousand miles begins with a single step, or in my case, a single google search. Either way, it’s a long way to anywhere.

By the way, I also learned that WILLiFEST is a film festival. And not one just for movies about penises. Well, not just penises.

← Climate change is real. And other things I’m not sure of. Mouse-made pizza and carnivals don’t mix. →